Jesper Hägg and Hampus Carlson met at Luleå University of Technology in 2012. They had both applied to the institution to get closer to nature. Little did they know what adventures their friendship would take them on. With different outdoor recreation experience, Hampus had mostly done sea kayaking and Jesper had mostly skied, they started to explore new outdoor activities together. It turned out they had one dream in common, mountain climbing at higher altitudes, and in the autumn of 2019, they set out on their biggest adventure so far. This is their story:

It is with happiness, exhilaration and love of life that we now look back on our journey to the mountain range of southern Russia, where our goal was to climb the highest mountain in Europe, Mount Elbrus, at 5,642 metres above sea level. It would end up being an adventure the like of which neither of us had ever experienced. The high altitude, physical effort and cold climate was a combination that took its toll on our bodies, to say the least. But when we look back on the journey, it’s not the strain on our bodies we remember, it’s the totally amazing views and all the fantastic people from all over the world that we shared the experience with.

One of the most important things we learned is that preparation and good equipment always pay off. Specifically, our equipment and our clothes helped make our journey feel seamless. Good clothes all the way, from base layers to outer clothes have kept us warm and dry both when hiking in plus 15-20 degrees, and when climbing the peak somewhere at around minus 15 degrees, and this has been invaluable to our enjoyment of the experience. 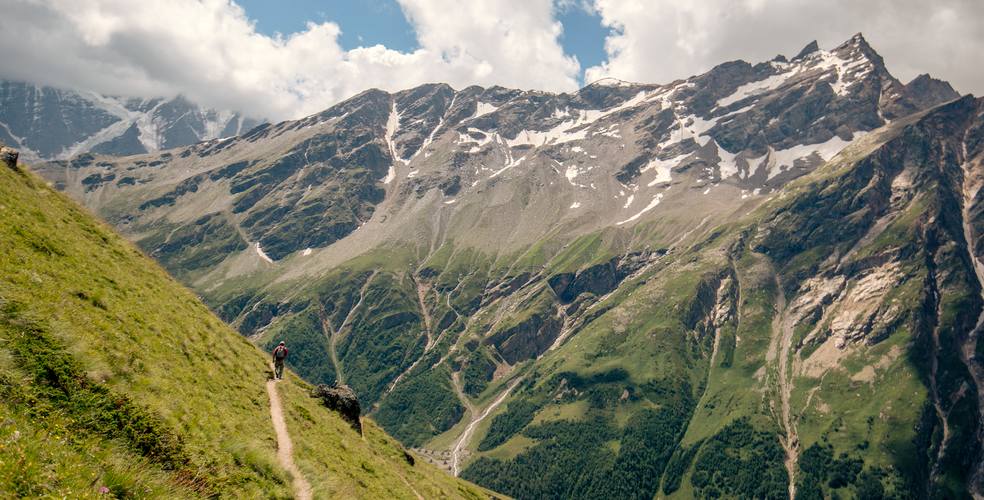 Our feet were the source of much preparation and worry before this trip, that blisters or cold and wet feet during the journey would ruin the entire experience. We chose to wear double layers of woollen socks so that as much of the friction as possible would take place between the layers of socks and not against our feet. Fortunately we both coped and had no problems during the whole trip.

After one more night in Terskol, we packed our bags with all the equipment and took a ski lift up to the Elbrus base camp, located at 3,800 metres above sea level.  There was a kind of hostel here which would be our accommodation for the next four nights. We shared a room with six other people from our guide group, a small room with no ventilation and a wonky floor. At this altitude it was noticeably colder than in Terskol, but most of all we really felt the effect of the altitude for the first time during the trip. Just the smallest slope was enough to get our heart rate up. Now we really felt like we on a proper mountain-climbing expedition and not on a hike in the mountains.

Our stay at the base camp can be classed as the most basic living either of us has ever experienced. There was no internet or telephone coverage to be found in the vicinity. The toilet was a shed by a slope consisting of cubicles with a hole in the middle of the floor. Well-deserving of the name “House of Pain” given by tourists from various places. There was no chance of having a shower, the only option was a wipe down with the wet-wipes that we had learnt were essential during these kinds of trips.  There was also a dining room in the hostel that served three meals a day that were included in the trip. The underlining theme of all the food served was dill, and the dill was often served with a bit of salad, fish, meat, soup or bread. Briefly put, not a culinary experience, but with all the efforts due to the altitude and the hike, it was a relief just to have food served at all. 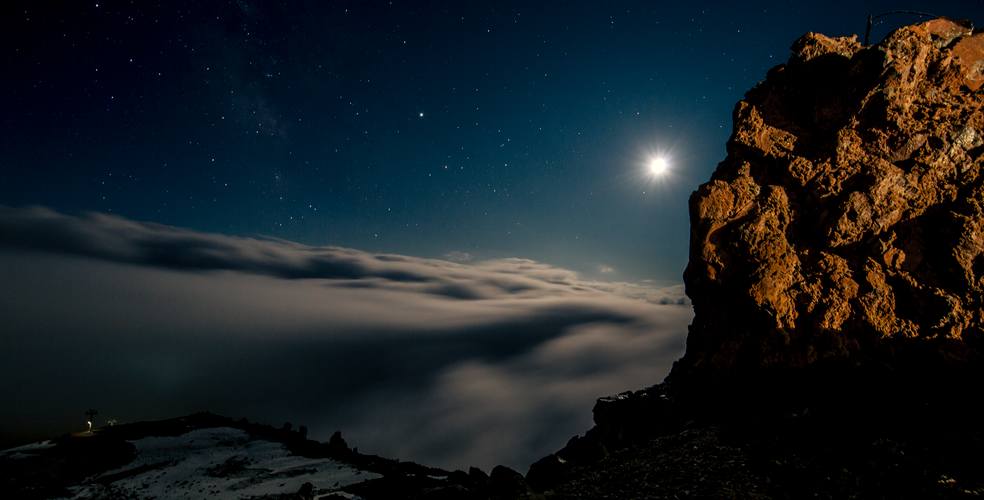 In between the climbs we did, much time was spent at the base camp just hanging around. We mostly went around in our base layers, and were very happy that we had chosen wool as the fabric, it meant that our clothes didn’t start stinking, despite our lack of hygiene. We spent the time either reading a book, sitting in the dining room getting to know the other people in our group, going through clothes and equipment before or after a climb, or just walking around the base camp looking out at the Caucasian mountains. One view that really took our breath away was one evening when the sun had set and the completely spectacular starry night sky appeared, and a bed of clouds had settled a few hundred metres below the level of the base camp and was lit up by the moon. A memory that will remain with us for a long time.

During those days at the base camp we did several climbs to acclimatise ourselves to the altitude. On the first day we walked up to 4,300 metres above sea level and practised self-arresting with an ice-axe, which is when you lie on your stomach and push your axe into the ground to avoid sliding down the mountain if you fall. On the second day we went up to 4,700 metres above sea level, ate lunch there and then came back down to the base camp again. These two climbs took place in the middle of the day, it was sunny and perhaps between -5 and +5 degrees in the air.

As we kept moving the whole time during these climbs, and the sun warmed us up quite well, we only needed our base layers and outer-layer trousers on our legs. In addition to that we also wore socks, hiking boots and gaiters that stopped the snow getting in. On our upper bodies we chose to wear a Crewneck 200 as a base layer, and then a Full Zip Jacket 400, and last of all a shell jacket. This was just the right level of clothes for the majority of the climbs. It was almost too warm when the sun was at its warmest and when we did our ice-axe exercises and moved around a lot. However, the clothes wicked away the moisture from our bodies really well, so we stayed fairly dry all day long. It was only when we sat still for longer than 10 minutes that we needed to put on an extra down layer to stay warm. 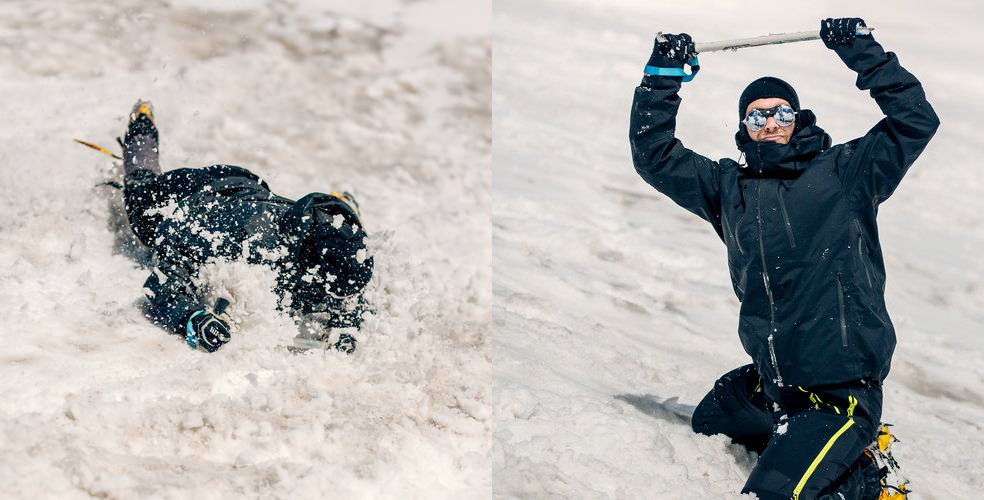 In contrast to the other climbs, our attempt at climbing to the peak started at midnight. This meant that we ate breakfast at 11pm, which made the entire day before really weird. We both tried to sleep during the day to get some rest, with varying degrees of success. This climb required significantly more thorough preparation of equipment and packing, as it needed more clothes, more water and more food.

We hiked in the dark for the first 4-5 hours. With only the light of our head torches, we were totally focused on putting one foot in front of the other, feeling the crampons grip the snow, and making sure we breathed consciously to get as much oxygen into our bodies as possible. At the first chance we had for a break, we couldn’t resist turning off our head torches and we were completely taken aback by the endless starry sky above us. Once we got higher up, we could also see the moon lighting up nearby peaks that stuck up through the layer of cloud beneath.

As it was much colder at night than during the day, we wore double base layers under our outer-layer trousers. On our upper bodies we wore a Crewneck 200 with a Zip Turtleneck 200 on top as a base. Then we added a Full Zip Jacket 400 as a mid-layer, and finally had a shell jacket on top. This worked really well for most of the night. During the breaks, we put on a down jacket so we didn’t get cold when we sat still.

The higher we climbed the colder it got. Our strategy was to put on extra clothes a little too early rather than too late, and this turned out well. We had an extra fleece and a down jacket in our rucksacks which we put on when it got colder. 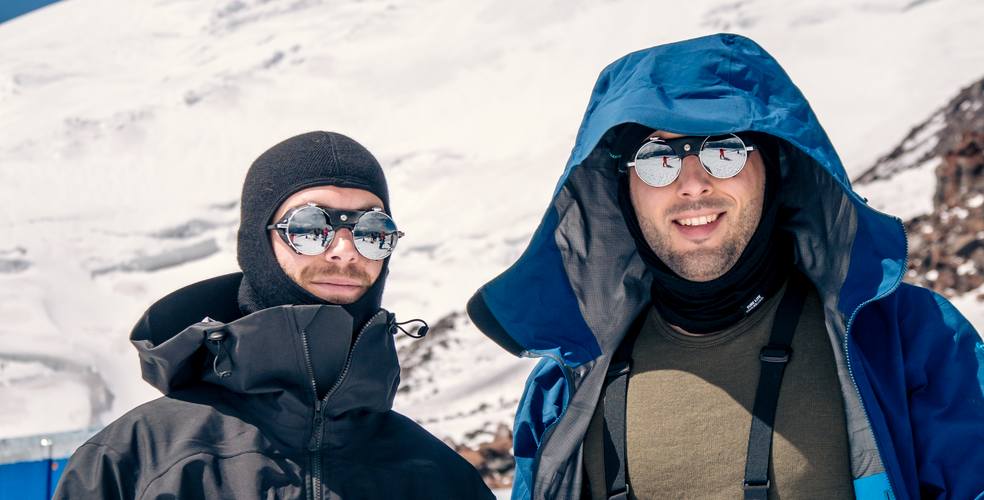 When we reached a ledge at 5,100 metres above sea level and had a break, the sun’s rays shone on us for the first time. An enchanting view of the mountain range compelled us to stay and just be captivated for a while. This was also the end station for those hikers who had chosen to travel in the slope-basher for the first part of the climb to save their energy, and there started to be a lot of people making their way towards the peak.

From this plateau, it was approximately 200 metres in altitude to the next plateau, which was located right in the middle of the two peaks of the mountain. These 200 metres took quite a long time, partly because of the quantity of people but perhaps mainly because of the altitude, which both of us really felt by now. Once we reached the plateau at 5,300 metres above sea level, our guide realised that we couldn’t really keep up at his pace any longer, so we reluctantly made the decision to turn around and head back down towards the base camp again.

In hindsight we are both completely satisfied with our experience. Of course it would have been awesome to stand on the highest point in Europe, but our memories are nonetheless full of all the spectacular views of the surrounding mountain range. We left the journey very happily and totally resolute that this would not be the last time that we would set out to reach the top of a high mountain. 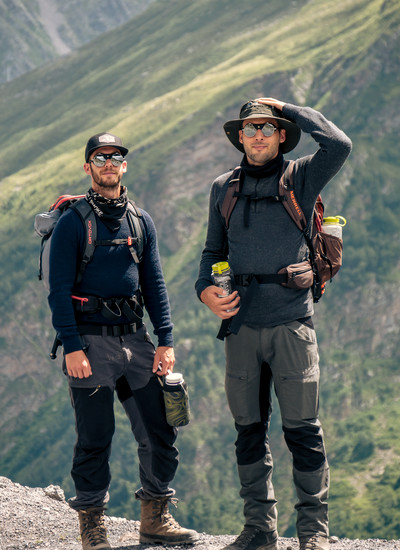 ABOUT JESPER AND HAMPUS

Favourite Woolpower garment:
Hampus: Long Johns 200 & Crewneck 200 – A base that can be used for everything. This combination has kept me warm when skiing, when I’ve been out running and after a winter dip in Årstaviken bay. Whether doing strenuous or low-intensity activities I always wear Woolpower closest to my body.

Jesper: Full Zip Jacket 400, An item of clothing that is really warm but nevertheless doesn’t take up much space. It’s never a problem to wear it under your outer-layer clothes, whatever the activity.

The idea to go skiing in the Caucasian mountains was conceived already when we were at Elbrus, when our guide almost lovingly described the mountains, skiing and food on the other side of the border in Georgia. We said even then that we should come back but bring all our skiing gear next time. As promised, we’re now ready for a journey to Gudauri, a ski resort in Georgia, located in the Caucasian mountains at an altitude of 2,200 metres.

Our goal is to reach the virgin snow around Gudauri, with the help of our touring gear, avalanche equipment and some experienced friends. We have complete respect for the risks in the area, so we will have a guide with us and also took an avalanche course during the autumn with Summit Guides in Åre.